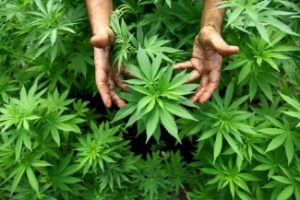 I sometimes fantasize about being the Johnny Appleseed of weed whenever I drive through the high deserts of northern New Mexico, back to my home in Colorado. I’d like to plant plants hither and dither creating little cannabis nurseries in the wild.

According to author Michael Pollan, in his book The Botany of Desire, Johnny spread the useful and healthful apple tree as a form of religious devotion and faith in humankind. Even though I don’t smoke pot, or benefit from it financially, that’s how I feel about the flashy green plant.

Cannabis is a Link Between Man and Nature

Cannabis represents a dynamic link between man and nature, two species leaning on each other for mutual benefit and survival. Man receives medicine, paper, cloth, and visions. Cannabis gets cultivation, transportation, and pollination.

In modern life, these natural links seem to be missing, or disappearing beneath the tides of an acidic ocean and the hot blasts of the latest “worst ever” heat wave.  When I find these links, they give me hope. Hope that our species might survive, despite our best efforts to exterminate ourselves.  These links encourage the daft idea that contrary to the evidence, we might even thrive.

In my road trip fantasy, I picture a giant, healthy weed growing up between the posts of the “Welcome to Colorado” sign. Its iconic, five-pointed leaves wave like flags of liberty in the breeze, whispering to all who notice it that freedom is good and right, and that a humble ditch weed can be just as American as apple pie.

Alas, I’m no Johnny Appleseed — and although I think highway ditches overgrown with cannabis would make for a brilliant piece of living guerrilla art — the authorities, I’m sure, would see it differently. They might even see it as something sinister.

So, in an effort to bring my fantasy to the right side of the law, I spoke to experienced weed farmer and master grower, Cole Whitaker, about how to grow weed outdoors — legally. Whitaker regularly coaxes hundreds of cannabis plants to bud for the benefit of the patrons of Santé, a medical and recreational marijuana dispensary with locations in Denver and Durango, Colorado. At Santé, he grows his plants indoors using a deep water culture and hydroponic techniques. 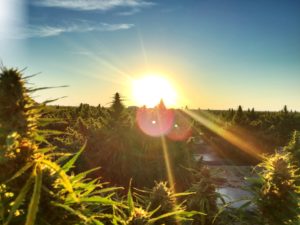 Santé uses hydroponics to create a highly controlled growing environment that allows Whitaker to daily feed his plants a nutrient cocktail of nitrogen, potassium, and phosphorous. According to Whitaker, with hydroponics, “you get more buds per plant and a higher THC profile.” In addition to growing in water, Whitaker has grown marijuana outside, and in a greenhouse. But he prefers to use hydroponics because “it’s cleaner.” When you grow indoors using soil and water — the soil and water make mud, and sludge — and you end up “spending hours cleaning it up.”

However, growing outdoors does have distinct advantages, says Whitaker. “Outside, flowers bloom riper because they grow off the sun,” which makes them stronger and more potent. “And you can grow completely organic.”

I brought my questions about growing outside to Whitaker during a recent phone call. “How would I go about, landscaping my yard with weed, like they do in Jamaica?” I asked.

“You’d start with a fence and a padlock,” I learned. And that’s just a start. In Colorado, the current law states that marijuana must be grown in a fully enclosed space, to modestly cover its blushing buds and fanning leaves.

The Colorado.gov marijuana website interprets the home grow law conservatively, arguing that the plant can’t even be grown outside. After some digging, I found that the Colorado Constitution Amendment 64 states, in section 3 governing the personal use of marijuana, “the following acts are not unlawful…provided that the growing takes place in an enclosed, locked space, is not conducted openly or publicly, and is not made for sale.”

As a gardener and chronic bootstrap do-it-yourselfer, I’m still surprised by this hardliner stance.  I’m encouraged that in the other states that have legalized, the laws are more pro-gardening. For example, in Alaska, you can grow up to six plants as long as someone can’t see them “without the use of binoculars, aircraft, or other optical aids.” Meanwhile, in Oregon you can grow up to four plants out of public view). And although Washington state still does not allow home grown marijuana for recreational use, it does allow a group of licensed medical marijuana users to form a cooperative garden that grows “up to a maximum of sixty plants” behind an 8-foot fence. However, it’s worth noting that in Washington, DC you must grow indoors.

As a gardener and an American, I’d like to see these laws progress. And someday I’d like to try my hand at growing marijuana outside. For now, I’ll bring this article into the theoretical, because for me, landscaping with weed isn’t a legal option. If I had my pick, I’d grow six of these valuable and highly regulated plants under the sun. I’d like to put one beside my barbecue grill, one in a pot on my porch, and a few in showy clumps along my fence. They’re beautiful, and unique plants, even if you don’t harvest any part.

When you do harvest marijuana’s fall bounty, it can be worth a lot of cash — and this sometimes attracts unwanted attention to you and your plants. The law’s requirements for locks and gates isn’t just for childproofing. It’s meant to deter garden thieves too. Whitaker wisely advised me, and now you, that when encountering masked marijuana bandits, to just, “let them steal, and call the police.” 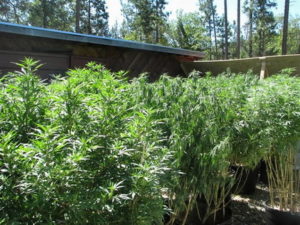 Even though pot farming comes with potential legal troubles, and thieving troubles, and all the customary gardening troubles with blights and pests such as powdery mildew and spider mites that eat cannabis — you might be surprised to hear that Whitaker still thought growing marijuana outdoors was worthwhile. Rewarding even. Plus Whitaker pointed out, growing your own is a cheaper way to get your medicine, and makes it easier to make your own juices and edibles. Selfishly thinking of myself, and my goal of growing weed, I asked Whitaker, “Do you think if more people were to grow marijuana it would make a difference?”

It certainly could improve the chances of marijuana being reclassified by the U.S. Drug Enforcement Administration, or DEA, and that in turn, could lead to a change in regulations. Currently, the DEA still considers marijuana as one of “the most dangerous drugs,” and classifies it as a Schedule I drug, alongside heroin. Schedule I drugs are considered to be “drugs with no currently accepted medical use and a high potential for abuse with potentially severe psychological or physical dependence.” A damning pronouncement for marijuana. So, in the spirit of freedom and liberty, here’s what I learned about growing marijuana outdoors — should I ever have the opportunity — broken down into five easy steps.

Step One: Heed the Rules

“I recommend people do their research first and get the laws. Once you know the law, then go for it,” Whitaker said. I second this opinion. Although buying weed no longer takes a lot of research, growing it legally still does. Be prepared to spend some time on this step. I found the marijuana information website NORML.org helpful with this step.

You’ll choose between Indica, Sativa and Indica-Sativa hybrid strains. According to Whitaker, Indica’s are the prettier plant, with fat, dark green leaves. They’re smaller than Sativa, but can still grow a full six feet tall and can stretch six to eight feet across.

If you’re looking to harvest, Indica’s are a good bet, with a shorter growing season. To encourage higher yields, Whitaker recommends staking Indica plants like a tomato and cutting the bushes into a lollipop shape just before they bloom.

Sativa, on the other hand, can grow an impressive, and hard to conceal, 15 feet tall.  However, most ring in at 10 to 12 feet tall. They’re a little narrower than Indica, growing four to five feet wide. Their leaves are as big as your hand, with long slender fingers. Since I’m not that interested in harvesting buds, and I like impressively large plants, I’d probably grow some of these just for their looks. Whitaker recommends Panama Red, Golden Goat, and Blue Dream as good Sativa strains to try. 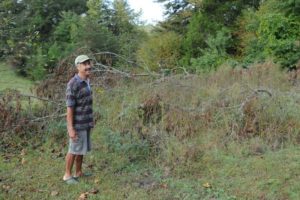 As I’ve discussed earlier, you may be limited as to where you get to grow. If you’re lucky enough to grow outdoors, put your marijuana inside a tall locked fence in full sun. During my research, I saw some people using smaller movable pots to regulate the sunlight their plants got when they had difficult growing conditions.

In a more perfect world, Whitaker thought weed might look nice in the backyard next to a swing. But he said “it’s gonna stink,” its blooms producing their iconic skunky smell during harvest time, and “your neighbors might not like it.” So keep your plant’s stench in mind when you choose your location.  Or you could find yourself trimming away the offending parts.

Whitaker recommends using The Bank. The Bank offers high-quality feminized seeds in popular strains that are guaranteed to flower. Feminized seeds often make the process of growing at home easier by ensuring all your plants are female. Due to the limits each state sets on the number of plants one can grow, using feminzed seeds helps to avoid growing non-flowering male plants. 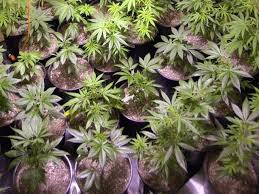 For my area of Southwest Colorado, Whitaker recommends planting outdoors around the 12 or 15 of June. Adjust for your location accordingly. You’re trying to keep your plants climate at 30 percent humidity, Whitaker said. That may be a bit challenging outdoors, so don’t be surprised if your plants suffer.

Keep in mind that weed is a bit more difficult to grow than some other plants. Whitaker said first-timers have a fifty-fifty chance of keeping their plants alive long enough to have a successful harvest. However, he added, second timers show a marked improvement, with an 80 percent chance of bringing in their crop in mid-October or November.

Whitaker described weed varieties as being similar to ski runs. You have “blues, greens, and blacks,” from expert to easy. So if you’re new to growing, or don’t have green thumbs, look for the easier strains. If you run into powdery mildew Whitaker recommends spraying with a mix of apple cider vinegar and water, diluted three tablespoons to a quart.

To fight spider mites, Whitaker makes his own organic and dangerously potent habanero spray, but it’s something I wouldn’t try at home. He cooks up one pound of habanero until it turns to a paste, adds it to water and sprays. While literally wearing a HAZMAT suit. He warns that this spray will burn you, but it won’t harm your pretty plants.

Economists Wants To Legalize Marijuana
May 23, 2019

Medical Cannabis To Ease The Pain And Some Others
May 23, 2019