War on drugs is a very expensive battle due to a great number of resources go into catching those who buy and sell illegal drugs on the black market, prosecuting them in court then housing them in jail. These costs seem particularly exorbitant when dealing with the drug marijuana, as it is widely used, and is likely no more harmful than currently legal drugs such as tobacco and alcohol.

There’s another cost to the war on drugs, however, which is the revenue lost by governments who cannot collect taxes on illegal drugs.

Marijuana Legalization and the Revenue From Marijuana Sales 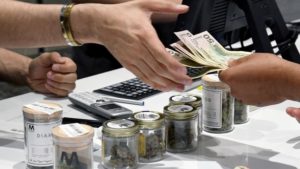 Of course, this doesn’t happen because the product is illegal; the prospect of jail time deters many entrepreneurs and the occasional drug bust ensures that the supply stays relatively low.

We can consider much of this $6.90 per unit of marijuana profit a risk-premium for participating in the underground economy. Unfortunately, this risk premium is making a lot of criminals, many of whom have ties to organized crime, very wealthy.

Legalized Marijuana Profits to the Government

Easton argues that if marijuana was legalized, we could transfer these excess profits caused by the risk-premium from these grow operations to the government:

“If we substitute a tax on marijuana cigarettes equal to the difference between the local production cost and the street price people currently pay–that is, transfer the revenue from the current producers and marketers (many of whom work with organized crime) to the government, leaving all other marketing and transportation issues aside we would have revenue of (say) $7 per [unit]. If you could collect on every cigarette and ignore the transportation, marketing, and advertising costs, this comes to over $2 billion on Canadian sales and substantially more from an export tax, and you forego the costs of enforcement and deploy your policing assets elsewhere.” 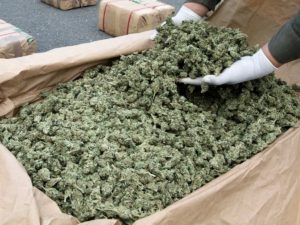 One interesting thing to note from such a scheme is that the street price of marijuana stays exactly the same, so the quantity demanded should remain the same as the price is unchanged. However, it’s quite likely that the demand for marijuana would change from legalization. We saw that there was a risk in selling marijuana, but since drug laws often target both the buyer and the seller, there is also a risk (albeit smaller) to the consumer interested in buying marijuana.

Legalization would eliminate this risk, causing the demand to rise. This is a mixed bag from a public policy standpoint: Increased marijuana use can have ill effects on the health of the population but the increased sales bring in more revenue for the government. However, if legalized, governments can control how much marijuana is consumed by increasing or decreasing the taxes on the product. There is a limit to this, however, as setting taxes too high will cause marijuana growers to sell on the black market to avoid excessive taxation.

When considering legalizing marijuana, there are many economic, health, and social issues we must analyze. One economic study will not be the basis of Canada’s public policy decisions, but Easton’s research does conclusively show that there are economic benefits in the legalization of marijuana.

With governments scrambling to find new sources of revenue to pay for important social objectives such as health care and education expect to see the idea raised in Parliament sooner rather than later.

Gardening Marijuana, Doing It Legally
May 23, 2019

Medical Marijuana: A Treatment For Anxiety
May 23, 2019